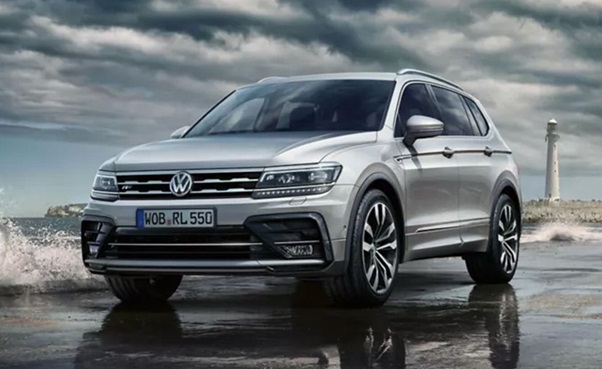 However, Volkswagen still sold a large number of Tiguan(s) in the country, owing to the fact that it was a very likeable SUV with the only major flaw being its value for money proposition. So, to further improve on this matter, Volkswagen has launched a bigger seven-seat version of the Tiguan, touting it as the Tiguan Allspace.

While it still continues to be as versatile and as delightful to drive as the smaller Tiguan, the Allspace has grown in dimensions to accommodate seven seats and switched to petrol power from diesel.

Moreover, how does the Tiguan Allspace fare against other SUVs in the segment? Is it going to be overshadowed as its smaller sibling amongst these large SUVs, or is it capable enough to shine and make a dent in the Indian market? Well, it’s time to find out.

As far as looks are concerned, the Tiguan Allspace looks very identical to its smaller sibling. In fact, one has to keep a keen eye on things to distinguish between both these SUVs from the front. However, move to the side, and the extra length is evident on first look. The rear, too, is quite similar to the smaller Tiguan. But the large overhang and the badging indicates that this is a bigger deal.

On the powertrain front, the Volkswagen Tiguan Allspace, as discussed above, follows a different approach as it arrives as a petrol-only model, unlike its smaller sibling, which solely ran on diesel power. Nevertheless, Volkswagen has used its 2.0-litre TSI engine here, which is a turbocharged petrol engine good for 188bhp and 320Nm of torque. It comes mated to a 7-speed DSG gearbox as a sole fitment.

The most apparent change of shifting itself from diesel to petrol-only power means that the Tiguan Allspace would be nowhere near as fuel-efficient as its smaller sibling. We expect it to deliver somewhere around 10km/l.

On the features front, however, the Allspace has improved on its predecessor, which is always a good thing. It still gets an 8.0-inch touchscreen with Apple Carplay and Android Auto, a panoramic sunroof, LED headlamps, LED taillamps, auto-folding wing mirrors, steering-mounted audio and cruise control, leather seats, and so on. Apart from that, the Allspace also comes with a fully-digital instrument cluster, which is crisp and offers a detailed view of just about anything without letting the driver take his/her eyes off the road.

In our opinion, the Tiguan Allspace looks its best in the Deep Black Pearl shade.

As of mid-2020, the Volkswagen Tiguan Allspaceis available in a single variant, in the petrol-automatic configuration. It is priced at Rs. 33.13 lakhs for the sole 2.0 TSI variant (ex-showroom, Delhi).  Also, grab the latest info on the new cars, only at autoX.