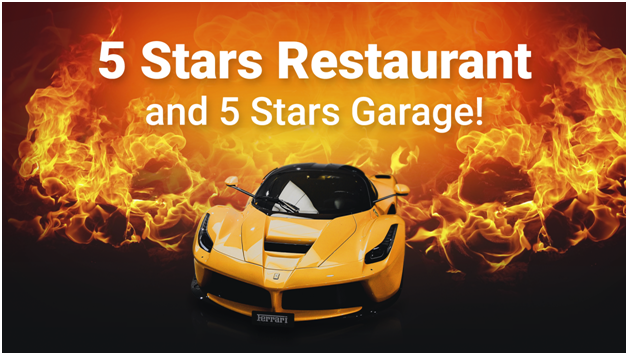 Dubai is famous for its luxurious restaurants and lively atmosphere. Top celebrity chefs have opened restaurants in Dubai, one of these must-visit restaurants, the renowned Gordon Ramsay’s: Hell’s Kitchen.

The restaurant has a spectacular view of Blue Waters Island, and guests can enjoy many of the chef’s special meals. But what does chef Ramsay enjoy doing besides cooking?

Well, the chef is a top-gear fan who enjoys riding and collecting unique and powerful cars.

It just goes to show that it is possible to have good taste in all areas. World-renowned chef Gordon Ramsay has a collection of cars, each more magnificent than the last.

The Briton, born in Scotland, has forged a sacred reputation for many years, and this has allowed him to experience great success, thanks to the TV program Kitchen Nightmares.

Apart from clashing Internet users on their questionable recipes, the garage of Chef Ramsay makes him famous. Here is the proof:

BAC is a car manufacturer in Liverpool, specializing in non-standard cars.

Most of its models are one of a kind, and their rarity is quite exceptional.

The BAC Mono is a completely crazy machine. An unidentified rolling object for only one passenger with a seat in the center of the car.

540 kg for a top speed estimated at nearly 270 km/h: the ideal recipe for performance. Still, not fast enough to escape the garage of the Michelin-starred chef.

The legendary and late Ayrton Senna once said: “You push, and you push to a level where there are no more compromises. You give everything you have, absolutely everything. ”

Embodying the spirit of the Brazilian driver and fulfilling the promise of the company to bring the ultimate McLaren supercar legal on the road, but designed for the track, Mclaren came up with the Senna.

Mr. Gordon even described his car once as the fastest drivable roller coaster in the world. Just that.

In the genre of non-standard and unique cars, the SP2 Monza sits.

The Ferrari Monza SP2 is the pioneer of a new concept: Icona (Icon).

Ferrari built this concept on the most iconic cars in its history to create a new segment of special limited series for customers and collectors.

The goal is to utilize a cutting-edge captivating style to mimic a classic immortal style, with mechanical progress, and a top-notch performance through non-stop development.

Any self-respecting Briton should own a car related to the 007 film saga. In Specter, the latest adventure James Bond, the script featured a Land Rover Defender.

Bingo! Gordon Ramsay took the chance to scratch one of the seven cars still fit at the end of the shoot. With a car value estimated at $ 320000, it is, without a doubt, one of the most expensive Land Rovers in the world.

Bowler Motorsport designed these SUVs. These are very special Defender SVX, finished in Santorini black and equipped with a myriad of accessories and solutions, such as huge off-road tires, roll cage, and a reinforced suspension, with shock absorbers from the specialist Bilstein, type rally.

Since his growing success on television, the chef has spent most of his time in Los Angeles with his family. So he needed an American super sports car in his garage.

With a top speed measured at 434 km/h, we are entering the big leagues. In its racing version, the Ford GT won the 24 Hours of Le Mans in 2016. Quite a few winners!

The Ford GT is often mistaken for a Ferrari, Mclaren, or any other exotic car, but I can assure you that it is a Ford car, and it even takes great pride in wearing the blue oval.

If you do not know this legendary car, I can say in a few lines:

Gordon Ramsay is a huge fan of the Prancing Horse brand. Not only his Ferrari 500 Maranello proofs that, but also his F335 GTS, his F430 GTB, and finally, the queen of the show: LaFerrari Aperta.

When Ramsay bought it, this Ferrari hypercar was worth a million dollars. Since then, its resale price has doubled, so it was a very good investment, as it is worth $4.5 Million now.

This beast has a 6.3-liter V12 engine, a 7-speed dual-clutch automatic transmission.

If that says anything, it says that a full tank and a full tummy are the perfect combinations for success. And that your car says a lot about you, just like the Chef Ramsay cars say a lot about his personality.

If you live in Dubai, enjoy the city life and the million options in this cool place. You can even have fun and invest here at the same time, as you can sell any car in Dubai, or any other product no matter big or small.

Why should my business invest in mobile billboard advertising?